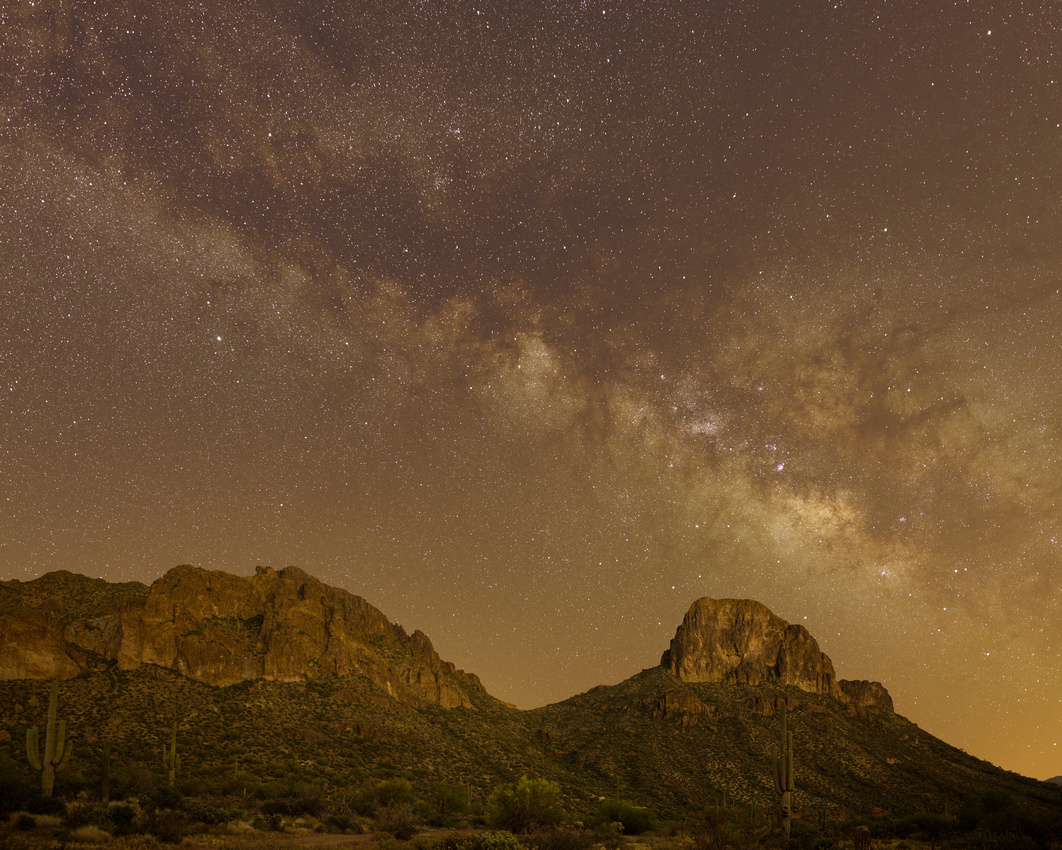 Sometimes things don’t work out the way you expect.  This picture of the Milky Way over Roblas Butte was one of those times.

Located near Queen Valley about an hour east of Phoenix, it’s a prominent feature along one of the main dirt roads.  Easy to get to, and with several great spots to camp close by, it’s high on my list of places to go.

There is a narrow time window for shooting the Milky Way over Roblas Butte.  April is the first month with good visibility; while the daytime temperatures are getting toasty by the end of the month, nights are still cool, so camping isn’t unpleasant.  September may work if you make an early morning of it and skip the camping.  In between it’s too hot and with monsoon storms to deal with there is a high probability of clouds obscuring the view.

My attempt the previous year was just okay.  I composed the butte and Milky Way in a portrait orientation and that caused some significant keystoning.  Rather than looking tall and imposing, the butte looked small and like it was falling away.  I was also working out the capture and post-processing workflow, so while I liked the picture it wasn’t something I’d consider printing or selling.  I knew I could do better.

The first time we had the place all to ourselves, which wasn’t surprising given the warm temperatures.  Our luck didn’t hold for this year.  There was a large group camped where I had hoped to camp and a smaller group just off the road.  We got a good camp site but had to contend with camp lights left on all night.  Not ideal, but we managed.  Fortunately, the lights weren’t bright enough to light up the landscape.

My original idea was to reshoot my earlier shot and correct the compositional issues.  This time I decided to take two exposures, one with the camera level to the landscape to diminish the keystone effect on the butte and then another mostly of the sky with just enough of the landscape for reference for stitching the two images together in post processing.  I got some great shots and was feeling pretty confident I’d succeeded.

That confidence evaporated when I reviewed my images the next day and attempted to merge the sky with the landscape.  What I didn’t consider was the distortion of the lens itself.  Because I changed the perspective of the lens the wide-angle distortion made it very difficult to stitch the two images together.  I corrected for the distortion as best as I could, but at the end of the day it just wouldn’t work.  I clearly need a better way to correct for distortion.  This landscape image was the other composition and it turned out much better.  It’s still not what I’m looking for, but there’s always next year!